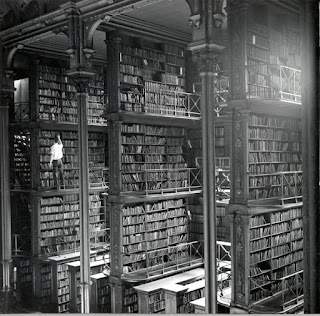 Herb Shriner’s comedy shtick was about growing up in a small town in Indiana. A typical line was, “It was so small that for entertainment we’d go down to the library to see who had borrowed the book.”

That’s pretty much how the Los Angeles Public Library started out, when LA was a frontier town. By the time of the great LA library fire, in 1986, it had grown to huge proportions, both in the size of the building and the size of the holdings.

Susan Orlean, a masterful story teller, gives us the entire story of the LA library in The Library Book, from the first book until now, centering on the 1986 fire that did such horrendous damage to the building and to the books and other items, a million of them.

What exactly happened? Was it arson? If so, did Harry Peek start the fire? If he did, why?

In the process, she tells the story from start to now not only of the LA library, but libraries in general. What is the place and purpose of a library? What does it mean to a community, and individuals, to have a library, and what does it mean to be without one? Is it just for entertainment, as for Herb Shriner, or something more?

I grew up in a small town in Indiana myself. Well, not actually in the town. We lived on a little hardscrabble farm four miles outside of Oakland City, but our library was in town. Upstairs over the fire station. The fire department had one truck, so you can guess how small the library was. It’s been replaced, but it will always be my favorite library.

I have been in some big and impressive libraries—St. Andrew’s University in Scotland, The Lilly Rare Books Library, The University of Illinois, [the second-largest university library in the world, smaller only than Harvard’s] where I used to do research for articles I wrote for Scribners’ reference works. But my best memories are in small-town libraries.

When our daughters were still at home, on Friday nights we would go to the local library after supper, each get an armload of books, and retreat to our respective bedrooms to read as long as we could. Occasionally we would hear someone go downstairs to get a snack, and we’d all gather in the kitchen over hot chocolate or popcorn and discuss our books--Rebecca Caudill or Nancy Drew for the girls, Alistair Mclean for me, Miss Marple for Helen.

We talked, though, only as long as it took to snarf our snacks. Then we returned to our reading, until we fell asleep. At some point Helen or I would wake up and go turn the lights off in the girls’ bedrooms, where they lay with their open books still lying beside them.

That’s when we started using plastic-coated paperclips as bookmarks. They don’t leave a crease in the page, but if you fall asleep, they don’t fall out the way an unsecured book mark can, and leave you wondering where you were in the book.

Libraries are a source of connection. They connect us to the history and knowledge of the whole world. For me, they are a connection to happy Friday nights.

“Without libraries, what do we have? We have no past and no future.” Ray Bradbury
Posted by John Robert McFarland at 4:51 AM