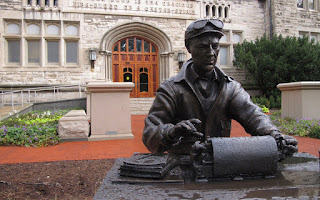 Famed Hall of Fame sports writer Bob Hammel was recently walking along 7th street, going from the parking lot to the IU Union Building for a meeting. He was behind some students as they passed Ernie Pyle Hall. One of them asked another, “Who was Ernie Pyle, anyway?” The answer: “I don’t know, but he must have given a lot of money to get a building named after him.”

No, he didn’t give a lot of money. He didn’t even make very much of it. But Friday, August 3, was the inaugural Ernie Pyle Day, a new national holiday. Declared so by Congress, since they have nothing better to do. Or at least nothing else that they can agree on.

Banks were not closed. Nor post offices. Nor anything else. No celebrations of the day, outside of the Media School building at IU, housed in what was the library back when I was a student here, the Media School incorporating what little is left of the Journalism Department that straggled over from Ernie Pyle Hall, with a statue of Ernie out in front, sitting at his typewriter, pecking out one of his columns. But it was a special day for me, because Ernie Pyle was my first role model.

Ernie was the first and foremost of the “embedded” reporters, slogging along with the foot soldiers in WWII, suffering just as they did, although he was old enough to be the father of most of them—in his 40s—and facing the same dangers. His columns about the war, told from the standpoint of those dogfaces in the front lines, were simply but elegantly written, and the soldiers said that Ernie told it like it really was.

That was important to me, because my beloved uncles were among those soldiers. My father was too old and too blind to be drafted. Well, not according to some. The draft boards became desperate enough to fill their quotas that Daddy was called in for a physical, even though he was 35 years old and the father of two and blind. [1]

His brothers were good draft material, though. Bob and Randall and Mike were in the army, Randall in heavy fighting in the South Pacific, where he got malaria that continued to plague him off and on through the rest of his life, and Mike in the worst of the fighting up through Anzio in Europe. Mother’s brothers were on the watery side of the military, Jesse in the navy [pilot] and Johnny in the marines. These were the men Ernie Pyle wrote about, the kinds of men I wanted to write about one day.

The war was almost over when Ernie was killed by a sniper, on the island of Ie, just west of Okinawa.

Ernie became an icon of his times. He was even featured, along with Bill Mauldin, the WWII cartoonist, in Peanuts cartoon strips, whenever Snoopy took on his military alter ego, the WWI flying ace. Now Ernie is remembered only in his home state, especially in his alma mater, Indiana University, where he was the first person to receive an honorary doctorate, remarked on by young people only as one who must have given money to get a building named after him. It’s not their fault, of course. They live in an age when buildings of all sorts are named only for those who bought the honor rather than suffering and dying for it.

I did go to IU, to the Ernie Pyle School of Journalism. I even had a class in Ernie Pyle hall. Stuff happened that caused me to detour from the newspaper route. But I became a different sort of war reporter. I learned from Ernie the importance of being embedded with the real people, and telling well the stories of ordinary folk as they did their best under difficult conditions, like that one about the man who was going down to Jericho when he saw a guy who had been wounded and…

1] Daddy was blind in one eye and almost so in the other, but one doctor tried to fix up a tunnel for him to look through to shut out peripheral light so he could pass the exam. It didn’t work.

Posted by John Robert McFarland at 3:44 AM